Undoubtedly, Medusa is one of the best-known mythological characters of the Greek mythology, especially because her myth has been reproduced in art since the classical antiquity. But why is it so attractive? Why the story of a female monster arises so much interest?

According to the Greek mythology, Medusa was a monster, a Gorgon, described as a winged female that instead of hair had venomous snakes. She was one of the three Gorgon sisters, all daughters of Phorcys and Ceto, marine gods of an archaic world. Medusa lived and died in the island of Sarpedon, near to Cisthene.  She was beheaded by Perseus, he gave her head to Athena, goddess of justice, who placed the head on her shield. It was very common in classical antiquity to see the image of Medusa’s head in Gorgoneion (an evil-averting device).

In his Metamorphoses, Ovid related that Medusa was originally a beautiful maiden, but because she was raped in Athena’s temple by Poseidon, the goddess enraged decided to transform Medusa’s beautiful face into something so terrible that could turn everyone who looked at her face into stone and made her hair into snakes.

Interpretations of the myth throughout history 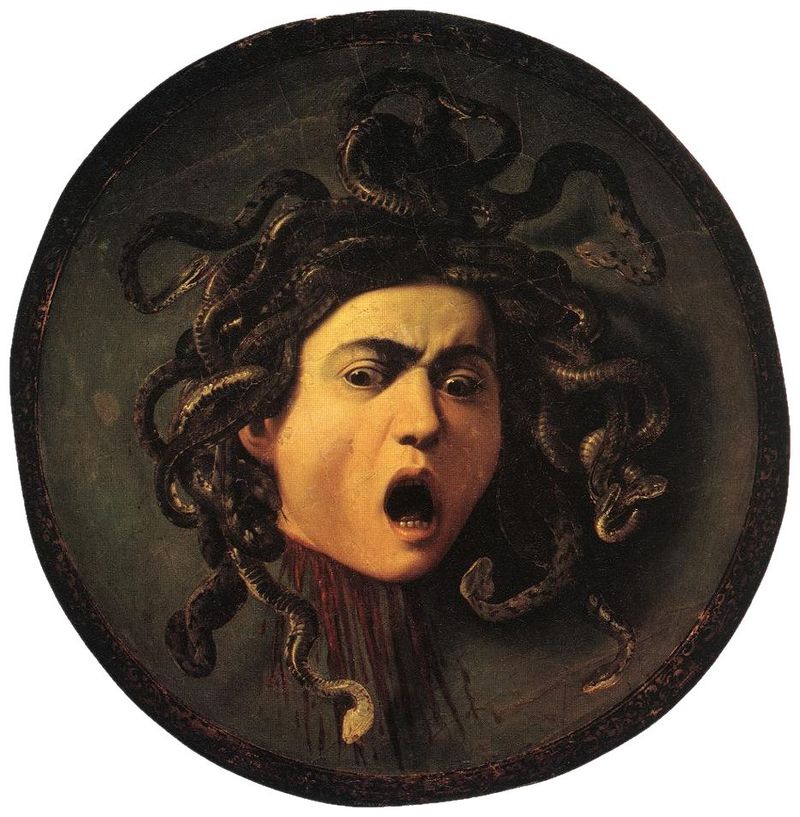 The myth of Medusa has been an object of several interpretations over the years. Many early scholars have interpreted the myth as based on or reconstructed from a real event, custom…in the past. According to the professor Joseph Campbell:

The legend of Perseus beheading Medusa means, specifically, that “the Hellenes overran the goddess’s chief shrines” and “stripped her priestesses of their Gorgon masks”, the latter being apotropaic faces worn to frighten away the profane. That is to say, there occurred in the early thirteenth century B.C. an actual historic rupture, a sort of sociological trauma, which has been registered in this myth, much as what Freud terms the latent content of a neurosis is registered in the manifest content of a dream: registered yet hidden, registered in the unconscious yet unknown or misconstrued by the conscious mind.”

During the Middle Age the myth of Medusa acquired other meaning. Due to the association that Christianity makes between sexuality and sin, the Church changed the aspect of Medusa, she was a femme fatale instead of the monster of classical antiquity. There is no medieval iconography of the myth.

In the Renaissance, with the rediscover of the classical antiquity, the myth reapers. There are several examples in the plastic arts and in literature too. Some of these interpretations of the myth are well known until today, as the painting of Caravaggio or the bust made by Bernini. In Renaissance interpretations of the myth is the terrifying aspect that dominate most of visual representations, especially in the shields. 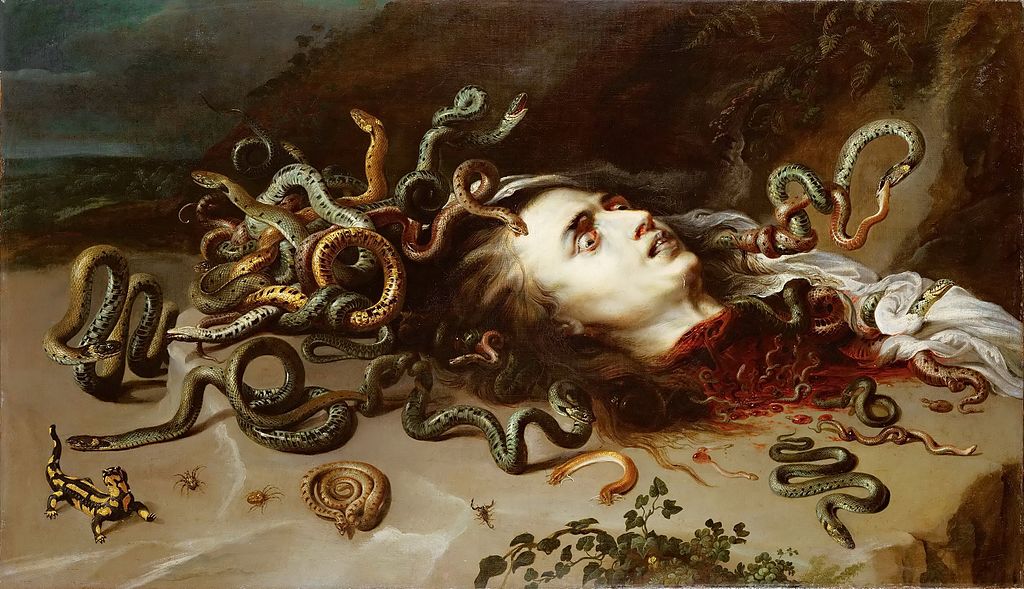 The fascination with Medusa is a commonplace among the poets of 19th century. But then, they developed the theme giving to Medusa some features of the femme fatale. In painting, Henry Fuseli is one of the first romantic painters to get interested in this theme. He was fascinated with the darkest aspects of Greek mythology and in many of his paintings he depicted the dread of the female sex as an instrument of man’s castration.

On the other hand, a rehabilitation movement developed with the Pre-Raphaelite school in England, which presents Medusa as a victim. We then discovered that, in the account of Poseidon’s rape of Medusa, it was the rape victim and not the rapist, who was punished by Athena, thus inaugurating a long tradition of tendentious justice. Instead of repulsion, it is the empathy that guided artists that treat the theme of Medusa. As Dante Gabriel Rossetti, he feels empathy for the inner drama of the woman, and he expressed it in his work Aspecta Medusa of which we do not know if it represents the Medusa before its decapitation or of Andromeda looking at the reflection of the Medusa in the water. As usual, Rossetti wrote a little poem for this work to explicates the subject in conceptual terms.

Andromeda, by Perseus sav’d and wed,
Hanker’d each day to see the Gorgon’s head:
Till o’er a fount he held it, bade her lean,
And mirror’d in the wave was safely seen
That death she liv’d by.
Let not thine eyes know
Any forbidden thing itself, although
It once should save as well as kill: but be
Its shadow upon life enough for thee.

In general, the women artists that treat the subject of Medusa were influenced by the ideas of their own time. For instance, Harriet Hosmer treat the figure of Medusa with as much empathy that Rossetti and the Pre-Raphaelites did, in the bust made by Hosmer Medusa has a beautiful feminine face, without any monster’s trace. As well as Alice Pike Barney, in her painting we can see Medusa as a beautiful woman, and with a little scared expression. Evelyn de Morgan gives us a little different perspective; her Medusa has a stronger expression and is less graceful than Hosmer’s or Pike’s.  On the other hand, we have other interpretations of the myth, as the one of Camille Claudel, who preferred to focus more on the figure of Perseus with Medusa’s head in his hand.

Perseus and the Gorgon by Camille Claudel (1902)

I couldn’t find in my research any representation of Medusa made by a woman before the 19th century. if any of you can give me any information on this, I would be very grateful.