The Proposition or Man Offering Money to a Young Woman is a genre painting by Dutch artist Judith Leyster. This painting is in the Mauritshuis in The Hague. It is an early work of the artists, she was only 22 years old when painted it.

It depicts a young woman sewing work by candlelight and a man who leans over her and touching her right shoulder with his left hand, while in his right hand he has an amount of coins, he is offering to her. Apparently, she is trying to ignore the offer and concentrate only in her sewing work. 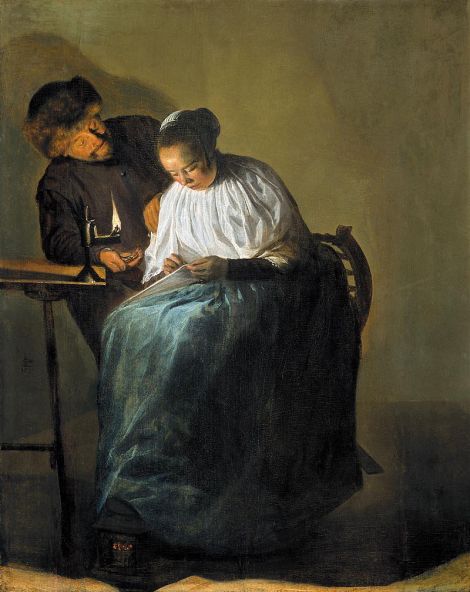 By the furry hat we can say the man is a foreigner. In Leyster’s Haarlem it wasn’t common that men wore a hat like this, as well as the rest of his clothes that suggests he is from a very much colder climate. And Haarlem being an international port at the time supports this idea.

A proposition for marriage or prostitution?

The Proposition is considered one of the most intriguing of Leyster works and probably the most notable of them.

The more peculiar feature of the painting is how different it is from other contemporary Dutch and Flemish works of the same subject: sexual proposition or as many of them are “merry company” genre which the convention was a scene where the couple showed interest in sex for money; facial expressions suggestive and the dress would be provocative. And sometimes would be a third figure, often it was an old woman acting as a procuress as we can see in the painting The Procuress by Dirck van Baburen.

In Leyster’s painting the woman is depicted as an ordinary housewife, she is concentrated in a simple and domestic task. One can say that she is the very model of virtue.

And if we check Dutch literature of the time we’ll find that stated the activity she is engaged is considered as the proper behaviour for virtuous women. And her dress isn’t provocative, in fact it is covering all her body from the neck to the ankles.

Several male critics completely overlooked that this woman is not welcoming the man’s proposition and called it “the tempting offer”.

Other interesting detail is the foot warmer glowing beneath the hem of the woman’s skirt was a pictorial code to represent the woman’s marital status of the time. A foot warmer wholly under the skirt indicated a married woman who was unavailable, exactly as it does in Leyster’s work. This code can also be observed in The Milkmaid of Vermeer.

In the 70’s the work of Frima Fox Hofrichter gave raise to a new and feminist interpretation. Hofrichter pointed out the differences between Judith Leyster’s painting and others of the genre as well as it had served to set a precedent for later artists. To her, the woman in The Proposition is an “embarrassed victim” presented sympathetically and positively.

However, some art historians don’t agree with Hofrichter interpretation, some said that an offer of money was a common beginning of a courtship at the time, and that the painting might depict an honest attempt at courtship.

Right now we are living a difficult time due to the spread of COVID-19 around the world. I know that staying at home for a prolonged period is very hard and can be a real challenge to keep active. Many artists (and amateurs) are using this time to explore their creativity. So, if you're feeling inspired these days and created a painting, drawing, sculpture, poem, etc. DM your works and I will share on the stories. The only condition to participate is to be a woman. . . . . . . . . . #womenartists #contemporaryart #quarantine #quarantineart #creativity #covid_19 #coronavirusart #coronaart #stayathome #restezchezvous #quedateencasa #fiqueemcasa
%d bloggers like this: