The Guerrilla Girls are a group of feminist activist artists. They’re famous for use facts, humour and outrageous visuals to expose gender and ethnic bias, especially in art, but also in pop culture, politics and film; as well as they’re famous for wear gorilla masks in public. The purpose of using gorilla masks in public is keep the focus on the issues they denounce and not in who they are. They believe in an intersectional feminism that fights discrimination at the same time that supports human rights for all people and genders.

Until today they have done more than 100 street projects, posters and sticks in cities like New York, Las Angeles, Mexico City, Istanbul, London, Shanghai, Rotterdam and many others. They do projects and exhibitions at museums that attack these institutions or their bad behaviour and discriminatory practices.

In 1984, Museum of Modern Art’s exhibition “An international survey of recent painting and sculpture” the year before, that in its roster of 165 artists (some sources indicate 169 others 159) only included 13 women; the proportion of black artists was even smaller and none of them were woman. This exhibition claimed to survey that era’s most important painters and sculptors from almost 20 countries.

In an interview the curator of the exhibition, Kynaston McShine, said that any artist who wasn’t in the show should rethink his career. This comment highlighted the explicit art world gender bias of that era.

In reaction to the exhibition and the comment of its curator, seven women protested in front of MoMA, the Guerrilla Girls were born. Soon after, the group expanded their focus to include racism in the art world and also took on projects outside of New York. With time, they began to address these issues nationally and internationally.

The Guerrilla Girls don’t use her own names, they adopt pseudonyms based on dead women artists as Frida Kahlo, Rosalba Carriera, Hanna Höch, etc. According to them, this is a way to not forget female artists.

The idea of the gorilla as the group’s symbol stemmed from a spelling error. One of the first members accidentally misspelled the group’s name at a meeting. Despite the fact that the idea might have been accidental the choice is nevertheless pertinent to the group’s overall message in many keys.

“And last, but not least, be a great ape. In 1917, Franz Kafka wrote a short story titled A Report to An Academy, in which an ape spoke about what it was like to be taken into captivity by a bunch of educated, intellectual types. The published story ends with the ape tamed and broken by the stultified academics. But in an earlier draft, Kafka tells a different story. The ape ends his report by instructing other apes NOT to allow themselves to be tamed. He says instead: break the bars of your cages, bite a hole through them, squeeze through an opening…and ask yourself where do YOU want to go”

Advantages of being a woman artist 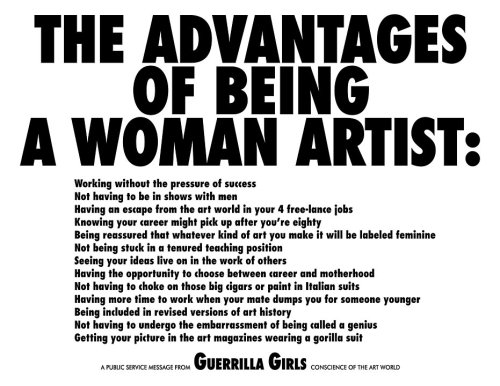 This is one of the most famous poster of Guerrilla Girls, in it they itemize, with great use of humour, all the advantages of being a woman artist. This poster was translated to many languages. In the video below, one member of the group tell how did the idea of this poster come about?

1 thought on “The Guerrilla Girls”